13/09/2017 Dar es Salaam, Tanzania. ROHE Automation forecourt solution RoSyS Comforter 12T has been highly esteemed and approved by today visit of Mr. Charles Kichere – Commissioner General of the Tanzania Revenue Authority (TRA) on GBP petrol station in Dar es Salaam city. Mr. Kichere visitation is part of the TRA project from the beginning of the year when the Revenue Authority directed all owners and operators of fueling stations in the country to fix EFD machines to the gasoline pump systems.

“The problem is that the majority of the people do not ask for receipts when buying fuel but with this initiative we expect the receipts to come immediately.” – said Mr. Charels Kichere as an answer to the journalists question about the tax leakages.

The installation of RoSyS Comforter 12T on GBP petrol station is part of the ROHE Automation contract as subcontractor and partner of the authorized by TRA official supplier of EFD’s on Tanzania market. The installations of RoSyS Comforter 12T in more than 4 provinces in Tanzania started in the middle of the year and it will continue till the end of 2017 when is the TRA project deadline.

“Today visitation of Mr. Kichere is great opportunity for us to show in real time the performance of our state-of-the-art product RoSyS Comforter 12T”, said Mr. George Pangev, General Manager of ROHE Automation. “We were very pleased to present the system potential, opportunities and resources and to hear his kind approval of the RoSyS Comforter 12T forecourt controller solution and showing his positive attitude regarding TRA and ROHE Automation future cooperation in Tanzania.” 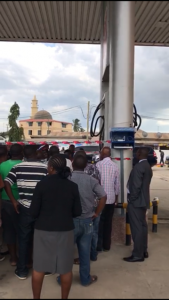